Happy new year! I know we are a few days late in wishing that but better late than never. Over the Christmas break I managed to do a lot more clearing at the allotment, carrying on with our plan of three long beds on the footprint of the previous raised beds. All last week at work I had been looking forward to the weekend, having made plans for the allotment. One of the new things I wanted to try out was cooking some food on a little bucket BBQ while I worked.

If you’re reading this, have an allotment and decide to chuck some sossies on a BBQ while you work, the first thing I’d say is to observe your allotment’s policy on fires. Mine allows small bonfires on the plots as long as we are considerate to neighbouring properties. This being the case I’m pretty safe having a little BBQ on the go. On Saturday I took a small bucket BBQ with all neccessary items and set it all up as a first job. As I worked away I kept an eye on the fire, and once it had settled down I put a pack of sausages on to cook while I carried on digging over our potato bed. I have a camping chair in my van and so I had something comfortable to sit on when lunch was done.

Back to the horticulture: as you can see I’ve finished digging over the first bed which will have potatoes in next year, pulling out the rest of the membrane used to line the bases of the raised beds. I’ve managed to mix the natural soil (which is quite loamy) with the contents of the raised beds. After raking the lumps out of the soil, I performed the spade test. This is where you throw the spade at the ground to see how far the spade sinks in, which will tell you how fine the structure of the soil is. Satisfyingly: this bed passed!

The metal bin you can see contains our build up of wood ash from our log burner. For now I have transferred the ash into a plastic bin by the shed, and will mostly be used when I get onto applying feeds to the beds in a couple of weeks time. My plan is to rake it into the beds for our legumes and brassicas along with some general feed. Initially I was going to dig in some fresh horse manure, however having had a rethink I’m going to get some pelleted chicken manure from our garden centre, as a ready to use alternative. I will still get horse manure throughout the year, however this will be mixed into my compost heap and applied next winter.

I have been researching whether I am able to use BBQ ashes on the beds and/or the compost. I’ve read a lot of articles saying yes as essentially charcoal is a wood product. However I’ve read a couple of articles questioning whether the briquettes we use are suitable as the agent that binds them together remains in some form in the ash. This being the case I’m going on the side of caution and getting rid of them. Sunday however I treated myself to a cheap frying pan for such occasions. The theory being here people is that I will be able to take small logs next time, build a wood fire in the BBQ and use the pan on the grill. I can then incorporate the wood ash once it’s cooled.

In other news: having been given some money from family for Christmas, I decided to treat myself to a new spade. Ladies and gents: introducing Doug! 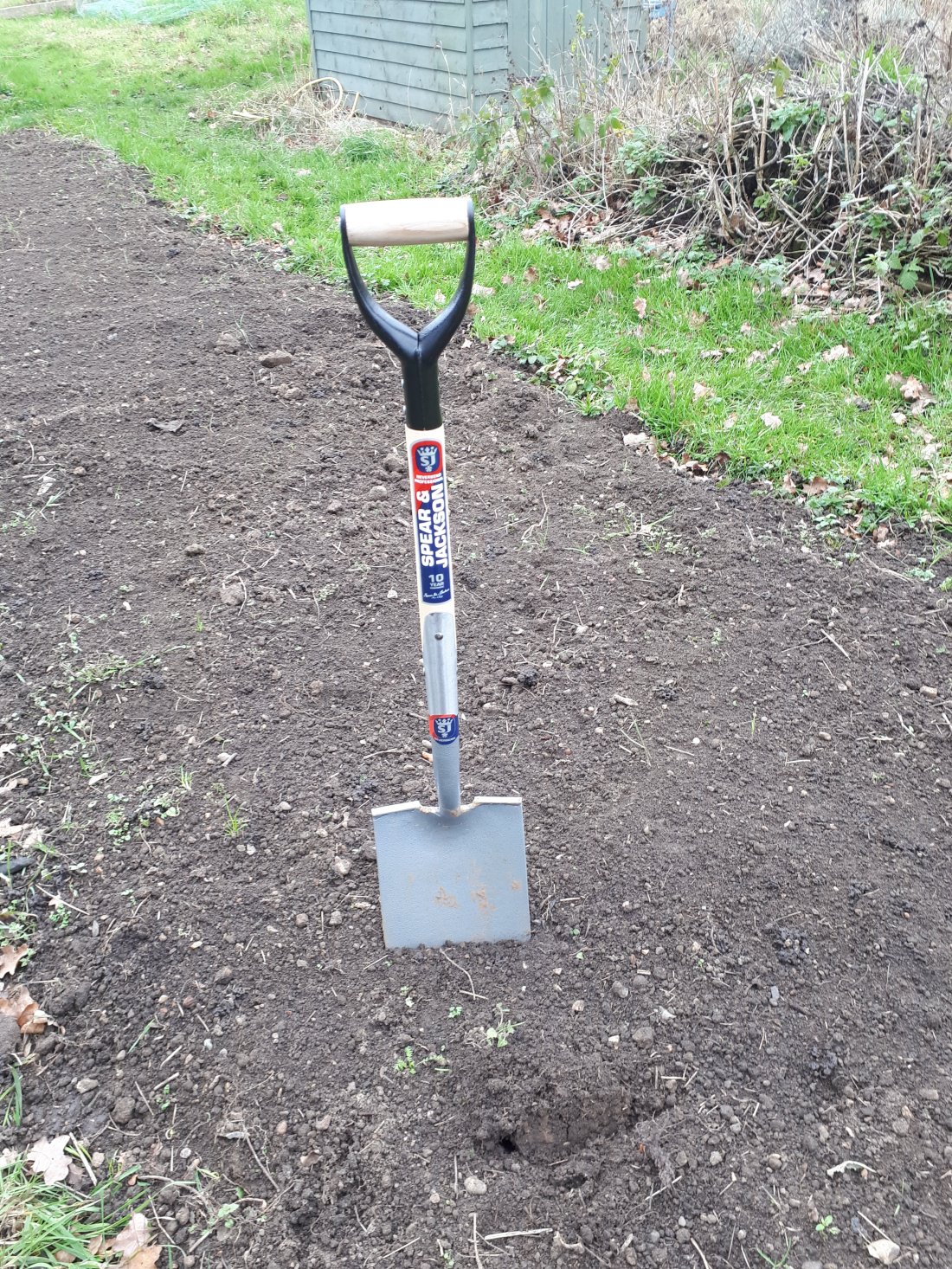 I wanted something sturdy so I could give the beds a really decent dig over. We use this make at work so I’ve had the benefit of putting them through their paces and know it’s a strong reliable make.

Hello! I'm Tom, and I write on two pages here on wordpress. My first is TomsCrohnsDiary where I share my experience of living life with a condition called Crohn's Disease. I started this page to raise awareness of Crohn's, as well as helping out people who have been diagnosed. My more recent page is all about self sufficiency, sharing ideas that I pick up with my fiancee Sarah. If you have any questions then feel free to message or comment and I will answer! Have a great day people. KBO View all posts by tomcoppin